Dragon Ball is a franchise that’s always had a dedicated and passionate fan base. The kind of fan base that has consumed every facet of the franchise; be it the original run of the show, movies, video games, action figures and other assorted merchandise. We here at DBZ Figures are obviously especially interested in the action figure aspect of the franchise and have seen the collector’s market for these action figures growing substantially in recent years.

While the US domestic market hasn’t manufactured any Dragon Ball related figures since the glory days of Irwin/Jakks Pacific, that shouldn’t suggest that there isn’t a demand for such products. Figures from Bandai, Banpresto and other Japanese companies still sell extremely well state side. Some of these figures go out of production or are exclusives and become difficult to find, in this article I intend to discuss five extremely valuable Dragon Ball action figures and a little bit about the companies who produced them.

If you don’t see a rare or valuable figure on this list that you expected, then stay tuned for part 2 to be posted in the near future!

Easily the best selling line of Dragon Ball action figures in production today are made by Bandai’s S.H. Figuarts. The line is known for it’s high articulation, included accessories and exclusivity. Many of the figures are web exclusives or convention exclusives; meaning they won’t be produced again after their initial run. This 2011 San Diego Comic Con Super Saiyan Goku is one of them! Though it’s only a repaint of the non-exclusive Super Saiyan Son Goku, it’s been selling prices upward of $900.00! 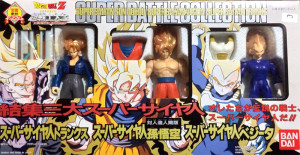 One of the longest, if not the longest running lines of Dragon Ball action figures was Bandai’s Super Battle Collection. This line of figures began production in 1992 and covered a wide array of characters from Dragon Ball Z all the way through Dragon Ball GT. Though the figures offered limited articulation, they did come with a few accessories and snap on clothing. One of the rarest releases in this line was the Super Saiyan 3 Pack that contained special repaints of Super Saiyan Goku, Vegeta and Trunks. This limited edition figure pack was exclusive to Toei’s Animation Fair in Japan and has sold for prices upwards of $1,000.

Another valuable figure on our list comes from the Super Battle Collection and it’s Dragon Ball GT’s Great Monkey Baby. The largest of the entire line of figures and subsequently it had the highest MSRP upon its release. That value has only gone up over time, as it now sells for $200.00 and up on auctions sites and collector communities across the web. 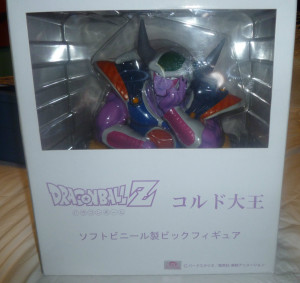 The list wouldn’t be complete without one a Banpresto piece in the mix, so here’s the Tokyo Toy Festival 2008 King Cold exclusive! It’s limited to 500 produced pieces, sits at 13 inches in height and can be removed from the throne he sits upon. Careful what you buy, as this figure (like many popular Dragon Ball figures) has been replicated by counterfeiters  en masse. This figure, mint in packaging, has sold for prices as high as $300.00. 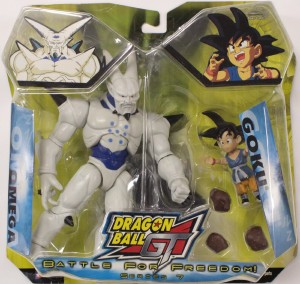 Last on the list is Jakks Pacific’s Omega Shenron figure. Despite Dragon Ball GT’s unpopularity among some fans, it seems to have quite a few rare and sought after figures! Omega Shenron was released in a limited quantity towards the end of Jakks Pacific’s tenure of producing Dragon Ball figures. Not many were produced and they weren’t as widely distributed as previous figures, resulting in a higher value in the collector’s market. This figure has sold for $400-$500 mint on card.