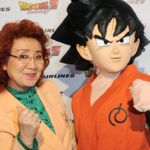 The long time Japanese voice actress for Goku is celebrating her 80th birthday today! That’s right, Nozawa, the voice of more than a few generations of fans, was born on October 25th, 1936 in Nippori, Arakawa, Tokyo, Japan. Her work on the Dragon Ball franchise, which is her most famous, includes the voices for Goku, Gohan, Bardock, Goten, Vegeto, Gotenks and most recently Black Goku.

Nozawa began her acting debut at the age of 3 as a child actress and has been acting in some capacity ever since. While she may be most famous for her contributions and work with the Dragon Ball franchise, she’s also voiced characters in anime titles like (but certainly not limited to) Astro Boy, Galaxy Express 999, Digimon Tamers, One Piece, Hamtaro and a guest spot on Naruto.

Historically, Nozawa is best known for her many roles voicing young male characters, earning her the nick name “The Eternal Boy”. However, many of her recent roles have been that of elderly women.

Thanks for the decades of great work and here’s to all her future endeavors!