If you’ve been collecting or following the Dragon Ball S.H. Figuarts releases you’re probably aware that not all of the prototypes we see make it into production. For some collectors this is frustrating, as many of these prototypes are extremely popular amongst the fan base.

I’ve decided to make a post documenting all of the prototypes we’ve been shown to date. I would like to iterate that all of these figures have the potential to still be released at some point down the road, perhaps Bandai wants to iron out some issues with the figures that are unbeknownst to the general public? Perhaps there are issues within the company regarding what figures get released when that are beyond our understanding.

All I know is some of these prototypes are some of my favorite characters and designs in all of Dragon Ball.

The S.H. Figuarts Nappa figure is one of the most controversial, desired and talked about of all the unreleased prototypes. Many collectors have complained that Bandai only seems to focus on releasing main characters and ignores lesser characters, which is why we have yet to see the release of this Napa figure, or even a prototype of characters like Yamcha or Tien.

Many collectors are also worried that we wont end up seeing a release of Nappa as the recent figure releases have all been from Dragon Ball material that came after the Saiyan Saga. Adding more fuel to the fire of all this speculation is that we haven’t seen Nappa’s prototype shown at any recent shows or conventions, leading many to believe that all hope is lost on ever seeing this figure see the light of day.

With Bandai and Tamashii Nations mum on the subject, we can only wait and see. 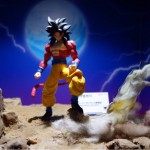 Super Saiyan 4 Son Gokou was the first and only S.H. Figuarts prototype to be shown from Dragon Ball GT as of this writing. While GT wasn’t exactly a popular series among the Dragon Ball fan base, it’s characters designs were.

Exactly one year from the prototype’s controversial debut we saw it shown yet again at the very same toy show, but this time with a new face attachment and a slightly updated paint scheme. Personally I’d say this figure is a pretty great candidate for release considering it’s positive reception by fans and the fact that it was shown again this much time later. 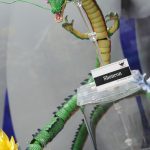 The S.H. Figuarts Shenron is probably the least likely prototype to ever see production. Why you ask? The size of the figure and the inevitable high price tag that would accompany it.

I know, I know, many collectors would shell out the cash for this. I would too! But thinking from the stand point of Bandai, it wouldn’t make financial sense. Meaning, the cost to produce an expensive figure that not everyone can afford, will likely outweigh the profits.

This Shenron figure has been shown at several shows over the years, and like Super Saiyan 4 Goku, has received a positive critical reception. So who knows? Perhaps this figure will see the light of day. In a world of infinite possibilities..

Jaco the Galactic Patrolman is a relatively new character to the Dragon Ball universe, which is also why this prototype received a bit of criticism among collectors. “Why release Jaco before other more established characters?” tends to be the sentiment of the fans on the critical side of things.

I can’t blame fans for being mildly upset about a Jaco release before older characters like Yamcha, Tien or Nappa. But I do understand why we’re seeing this prototype now. Dragon Ball Super is the new horizon for the franchise and Tamashii Nations would be very unwise to not be releasing figures in support of the new series as it airs on television in Japan.

I also think fans ended up liking Jaco when they actually got to see him in action. He’s a likable character and that helped soften the resolve of critics. I also feel that fans shouldn’t give up hope on older figures and prototypes being released in the future. Tamashii hasn’t done anything to lead us to believe they wont go back and release older figures from the Dragon Ball catalogue. 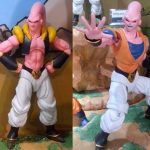 I’ve decided to include both of the Buu figures in one here, as I’m unsure if these will be released separately or as one figure. But these Buu prototypes were also shown at Tamashii Nation 2014 and then not seen much since. The reception amongst fans was positive, so what gives?

Maybe Bandai is trying to decide whether or not to release Buu in the Gohan and Gotenks absorbed versions, or to just release a standard Buu figure. I wouldn’t mind paying a little extra for the included options of displaying Buu in several of these forms, but if Tamashii Nations did make such a move, it’d be the first time they’ve ever done anything of the sort.

Personally I think a Majin Buu figure of some sort is a “no brainer” for release. At this point he’s one of the last major villains of Dragon Ball Z to release, so I can’t imagine him never seeing production.