The line up for the UDM Burst 14 is out and has several characters as they appear in the movie ‘Revival of F’ as well as other popular characters. The 14th incarnation of the keychain/figure line consists of Super Saiyan 3 Goku, Beerus, Broly, Gohan and Raditz.

These will be hitting stores in July of 2015. 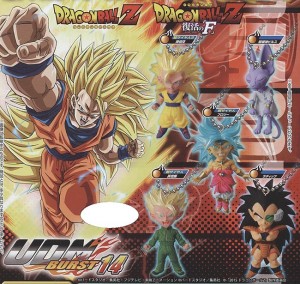