Tsume announced at Tsume Fan Day 2 that they’ve acquired the license to produce Dragon Ball theme statues. Well known through out Europe, Tsume is a company out of Luxembourg that creates PVC and resin statues for several well known titles including Bleach, Black Butler, Naruto and others.

Tsume describe themselves on their website as: “Created with passion, dedication and respect of the original work, Tsume’s figures and statues are fully designed in Luxembourg. Resin or PVC, our works try and fuse European, American and Asian artistic visions.”

No word yet on what they’ll be producing first or when they’ll be available for purchase. But if you’d like to see a few examples of Tsume’s work, check out the pictures after the jump. 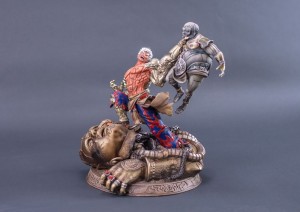 For more information on Tsume, visit their official website.

About Majin Rob 670 Articles
Majin Rob is the webmaster and owner of DBZFigures.com.