Tons of news in the Dragon Ball action figure community lately! With the release of the new movie “Revival of F”, we will be seeing figures related to the movie come out in several well known lines of figures including but not limited to Banpresto’s DXF line:

Next up are new releases in Banpresto’s WCF (World Collection Figures) line, which are also “Revival of F” themed figures:

Third, we will be seeing “Revival of F” UDM Burst 11 figures, which features a Jaco the Galactic Patrolman figure. These should be retailing for about 200yen: 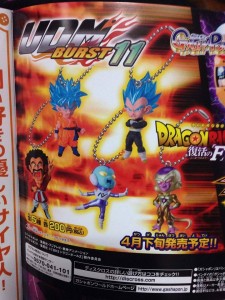 ..and last but not least we have this mysterious advertisement featuring silhouettes of the upcoming Dimension of Dragon Ball figures by MegaHouse. From what we can tell it appears the next releases in the series will be Kid Son Goku, Vegeta, Trunks, Frieza, Buu and Super Saiyan 3 Goku. These should be retailing for about 8,000yen. 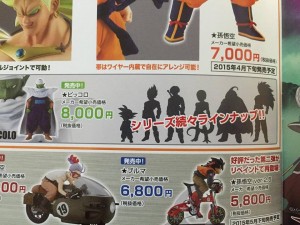