Earlier this week we witnessed the highly anticipated return of the Dragon Ball Z collectible card game, helmed by Panini and so far the re-launch has been a success. However, this success has not come without problems.

The starter deck card S78 “Orange Truck Lift” wasnt included in the initial printing and rumors have suggested it was pulled due to “Chevrolet” being written on the back of the truck, though none of that has been confirmed. 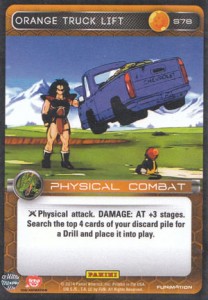 Panini released a statement saying this:

“ S78 – Orange Truck Lift – This card is not printed with the first set and will be printed and distributed at a later date.” – Source: Panini’s Official WordPress Blog

At this point it’s unclear if any of these cards actually made it out and into distribution, so if you have one of these let us know in the comments!