Bandai’s S.H. Figuarts line is without doubt one of the most successful Dragon Ball action figure lines to date. Many figures receive limited runs and are marketed as “web exclusives”, which means once they’re sold out there won’t be any more made. With this rarity the figures have a tendency to increase in value over time and enjoy a lucrative third party seller’s market.

Figures within this line that have been discontinued often sell for several times their original MSRP. While the rarity and exclusivity of these figures is part of its success, it is also this perceived rarity that enables counterfeit manufacturers like Datong and others to enjoy great profits by selling illegitimate figures. 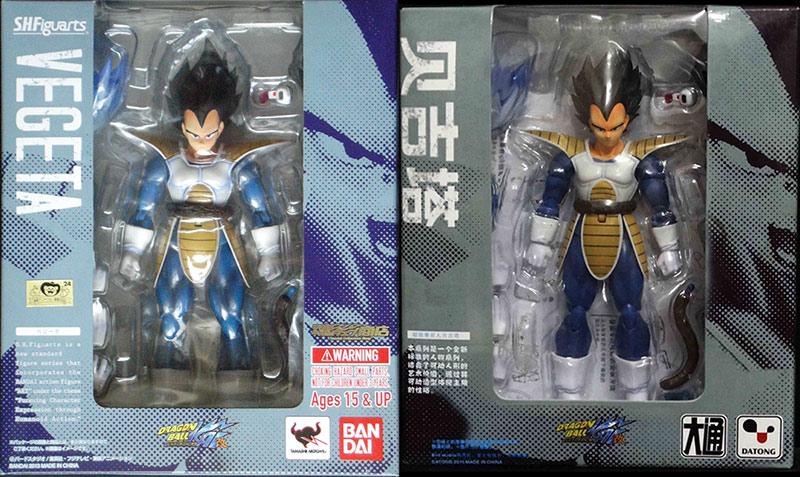 Above you will see two Vegeta figures, on the left is the legitimate S.H. Figuarts Vegeta and to the right is the unlicensed Datong version. Many differences with the packaging stand out immediately upon your first glance, a major difference being that the Datong version lacks a “Toei” sticker.

As many collectors know the Toei sticker is an excellent way to tell immediately if you’re looking at a counterfeit figure. While many legitimate figures in other lines may not always have the Toei sticker, it is an absolute certainty that any legitimate S.H. Figuarts figure will have this sticker.

Note: The Toei sticker can be gold or silver. Both are okay.

Below I’ve highlighted some of the other differences between the legitimate and counterfeit figure packagings. While counterfeiters are always improving their goods to appear more legitimate, using the clues provided below will help you differentiate between a bootleg and a licensed product. 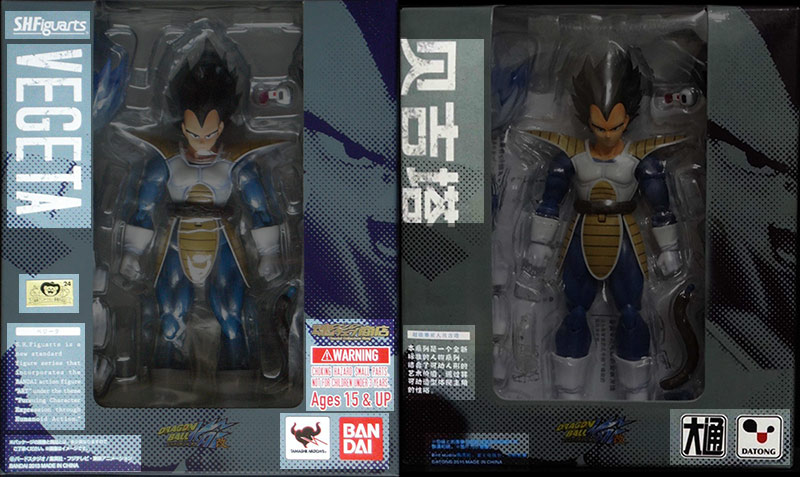 The Quality of Bootlegs

It should be noted that many counterfeit figures are of a higher quality than one might expect. If the figure is without a box, the differences between a Datong copy and a real figure become very subtle and difficult to spot. Often times it will come down to close inspection of the figure’s paint and materials.

While it may be tempting to seek out a counterfeit figure, as opposed to paying a premium for an authentic piece, one should be aware that counterfeit action figures have  been known to be made up of unregulated and toxic materials. Examples include; lead based paints and other carcinogenic materials.

A Gallery of Comparisons:

Below is a gallery of several legitimate and counterfeit SH Figuarts figures, provided by YouTube user ERivera94. Please refer to his channel for videos that compare and contrast the differences between these counterfeits and their legitimate counterparts.

In each photo below the real figure is on the left and the fake is on the right. You may notice that the biggest differences between the figures are the quality of the paint and details in the sculpting.